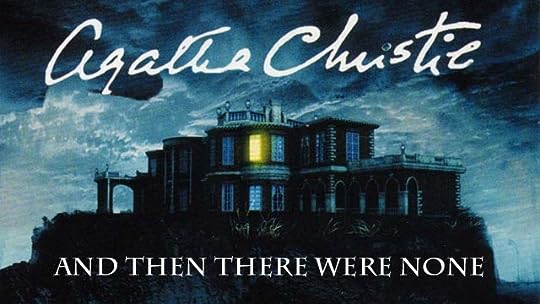 I just finished reading And Then There Were None by Agatha Christie. This is my second review for the 2018 Back to the Classics Challenge, in the category Classic Crime Story.

I’ve never been much of a mystery reader but Christie is convincing me I should keep trying. Murder on the Orient Express was my first novel of hers and I deeply loved it. When I saw Crime Story on the list this year, I knew I’d pick another by her. This was a captivating story. 10 strangers arrive at a mysterious island. A disembodied voice accuses them of crimes – murders, but those outside the scope of the justice system. Guilt.

One by one they’re killed themselves, following a pattern set out in a Ten Little Indians poem framed throughout the house. One by one they come to terms with their own guilt. One by one they succumb to fear and finally death. It’s the perfect mystery – 1o dead bodies and no one else could possibly have been on the island.

I binge read this book in a way I needed. I’ve been reading a lot of theology lately, plus I just finished Dickens. I needed something engaging and quick to pour through and “reset” in a way. And now I’m ahead on my BTTC Challenge! Maybe I’ll actually finish this year.

On Goodreads, I gave And Then There Were None four stars. It would have been five stars if I had just skipped the epilogue. For some reason, finding out how it all went down spoiled it for me. I was much more enthralled when the mystery was unsolved. But then I would have been wondering for the next several days…

Great Expectations by Charles Dickens was my 1st book for Back to the Classics 2018 – A Classic that Scares You. Why this one? I’ve been intimidated of this read since a bad experience freshman year of high school. First, I’m not sure I actually read the book when it was assigned – that was a bad season of using Cliff Notes instead. Then we watched a terrible film adaptation. And THEN my teacher stepped out of the room during the scene where Miss Havisham catches fire. Bored teens + no supervision = watching that awful scene on repeat for several minutes until the teacher came back. Needless to say it left a horrible taste in my mouth. I’ve been saying I really should re-read it due to it’s classic value for 3 years now. I never got around to it out of fear. But I conquered my fear and I’m so glad I did!

Basic recap: Pip, an orphan living in poverty with his abusive sister and wimp brother in law, has nothing to look forward to in life. Until he enters a complicated web of wealth and crime and lies and expectations. From nothing, to everything, back to nothing, Dickens leads us on a whirlwind of emotions. Dickens does a particularly brilliant job building believable characters – even the weirdest minor ones. My favorite is Wemmick with his Walworth sentiments. I love Pip’s journey. The ending is especially powerful as he moves past his Great Expectations into a life worth living.